Who here loves pretzels like me? I am a serious pretzels fan especially AuntieAnne's Pretzels which I often crave. If I ever do not have appetite or do not feel like having a heavy meal, feed me with some pretzels and my appetite would be back. 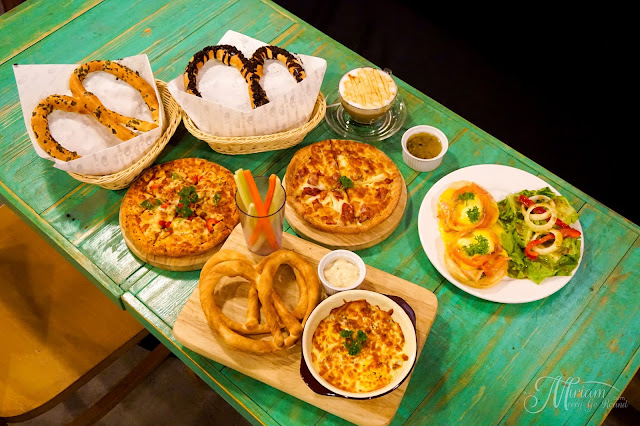 Now have you heard of another cafe in town specializing in pretzels and coffee? Pretz n' Beanz is a food joint that has an assortment of pretzels and just a few weeks ago, I had a mini gathering/food review session with some friends whom I have not met up with for a long time at Pretz n' Beanz, Bangsar. This outlet is located along the same row as Antipodean so you should not have difficulties locating it but... I have to say searching for a parking at Bangsar is horrendous especially on a weekend afternoon. After going round and round in circles I finally decided to just park at Bangsar Village and walk over to Pretz n' Beanz. 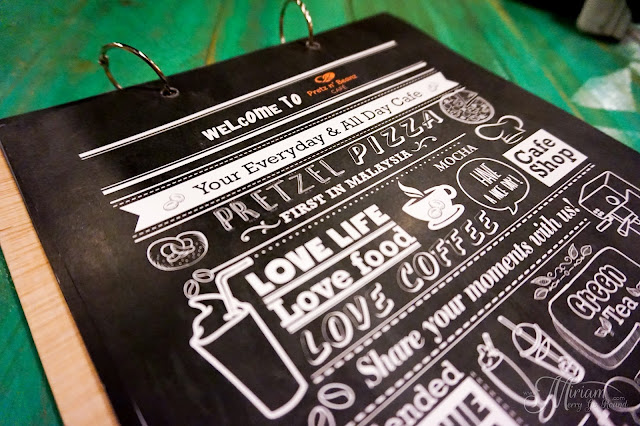 The smell of freshly baked pretzels filled my nostrils as I enter the cafe which was definitely a good sign and while waiting for the rest of the gang to arrive, I had a look through their menu which definitely offered a wide variety of pretzel dishes like their Pretzel Pizza, Filled Pretzels as well as some breakfast dishes. 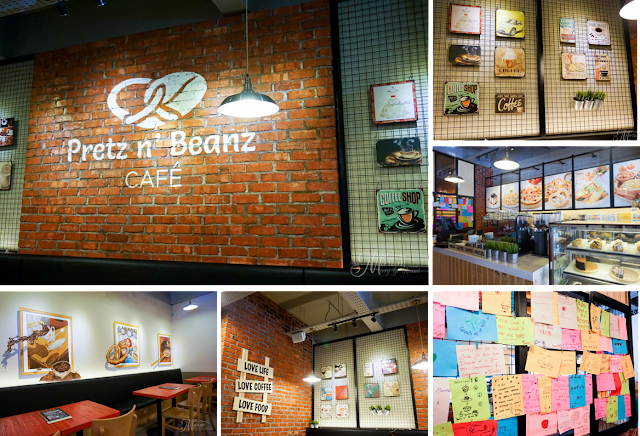 The interior of the cafe was nice and cozy and I especially liked the brick wall for that added touch and dimension to the room. Not only that, did you know they had some 3D art on the wall too? 3D Museums have been a craze lately so it was fun to see some here at Pretz n' Beanz.

After the whole gang arrived, it was time to order our food! There was a slight debate about how much should be order since we nearly wanted to try everything on the menu but we focused on some of the newer offerings at Pretz n' Beanz. 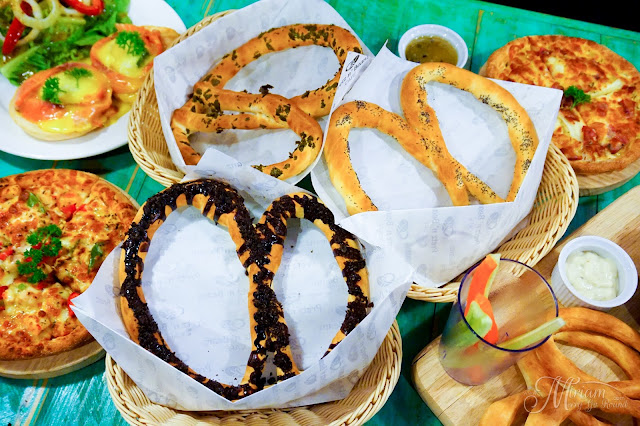 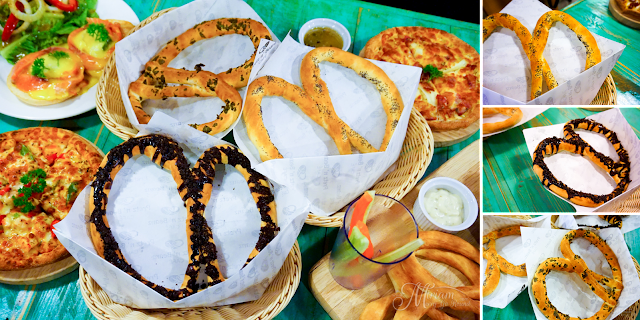 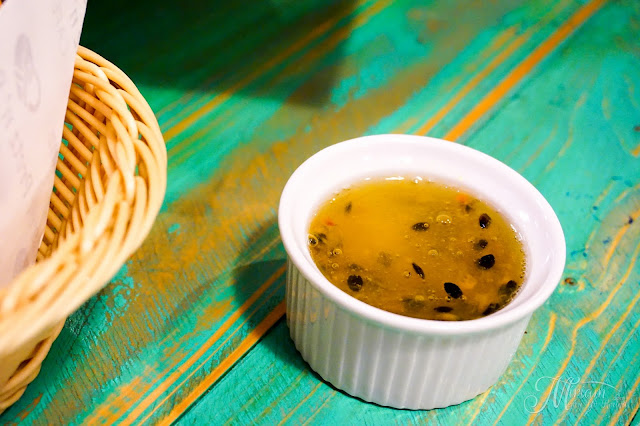 Of course we have to order their pretzels! So we got three different flavors which are the Poppy Seed Pretzel, Seaweed Pretzel and the Chocolate Pretzel. We also got their Passion Fruit Jam Dip which was homemade too. Texture wise, it did not really have a very chewy texture compared to Auntie Anne's but it was flavourful and the passion fruit jam was delicious! Sweet and tangy, perfect dip to go. 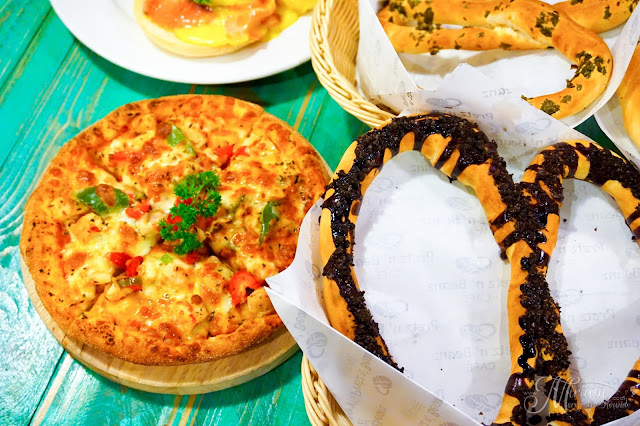 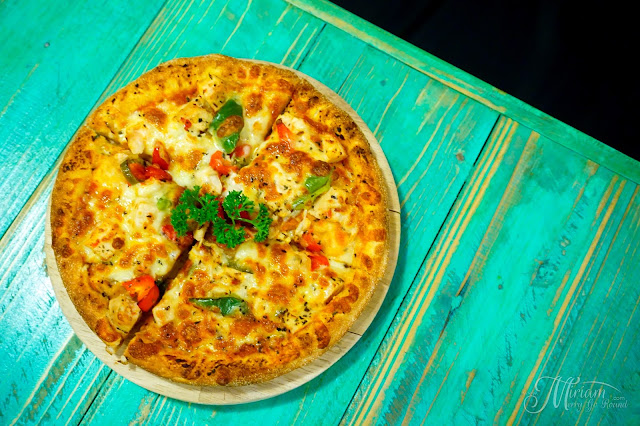 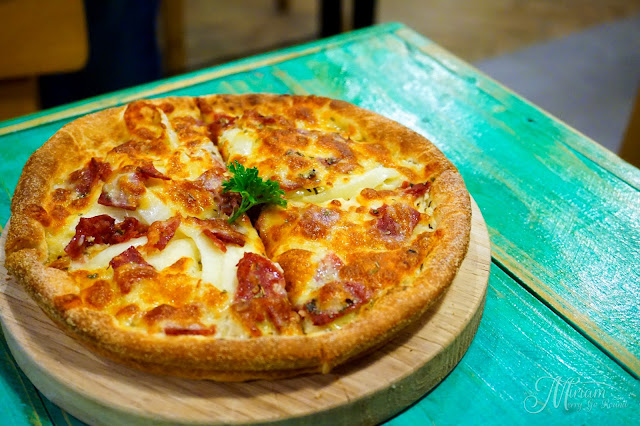 We also ordered their Pretzel Pizza which I was very curious to try. How well would a pretzel and a pizza combine with each other? Since there were 8 of us, we ordered the Flamkuchen Pizza and the Hot Pepper Chili Chicken Pizza. The crust was made from the same dough they used for the pretzels so it had a slightly chewy texture to it. The Flamkuchen Pizza which had pretzel dough topped with sour cream, yellow onion slices, beef brisket and mozzarella cheese. The sour cream taste was a bit too light for me to really taste it so it would definitely be better if they added more sour cream to it. The Hot Pepper Chili Chicken did not leave much of an impression to me either, probably because it did not have the fiery kick I was hoping to get. 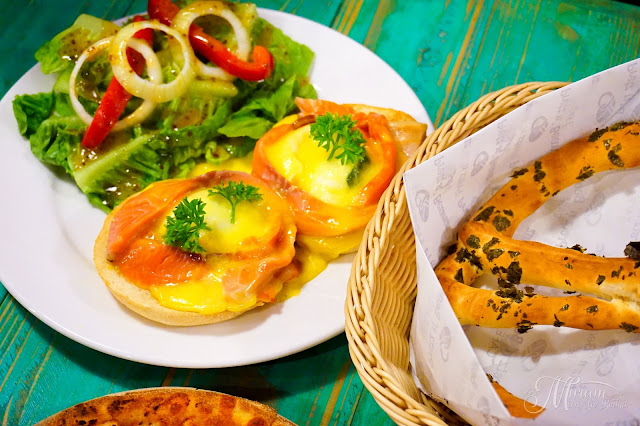 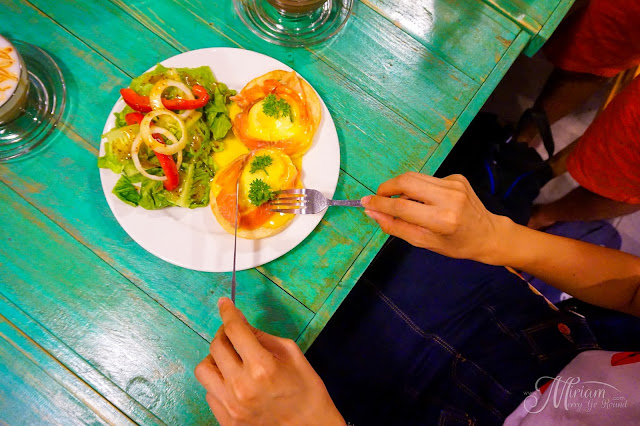 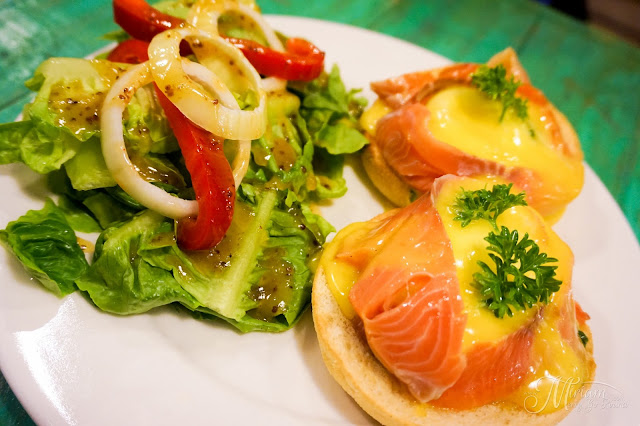 Pretz n' Beanz also serve some All-Day-Breakfast dishes like this Royale Salmon Egg Benedict which was just soooo good! I LOVE my eggs especially if it is poached eggs. Pair that together with some perfectly smoked salmon and I am sold! The creaminess of the Benedict sauce was marvelous when eaten together and just bursting that egg and seeing the runny yolk flow out was just orgasmic. ok forgive my craziness over these eggs 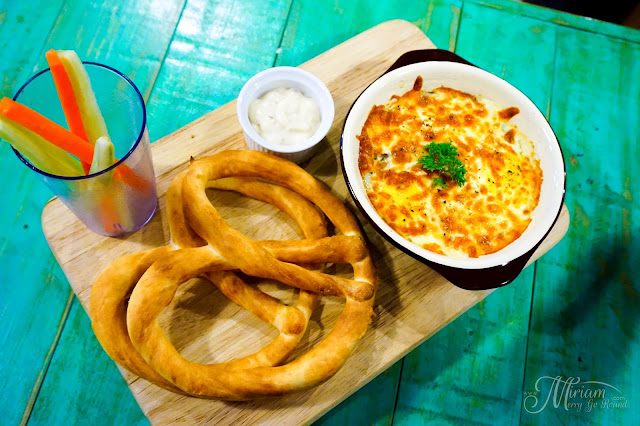 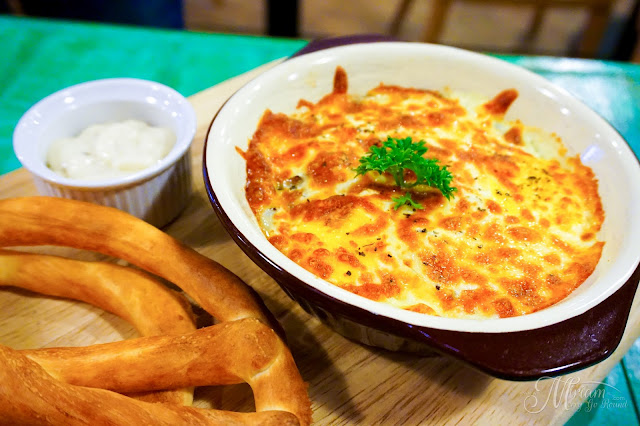 We ordered the Champignon Baked Egg which eggs baked with tomatoes, mushroom and mozzarella cheese served with two original pretzel. This dish disappointed me with overbaked eggs which left the dish rather dry. It was rather difficult to eat it with the pretzels as well since I was not able to dip it into the baked eggs. But I have to say portion wise, it could feed two small eaters. 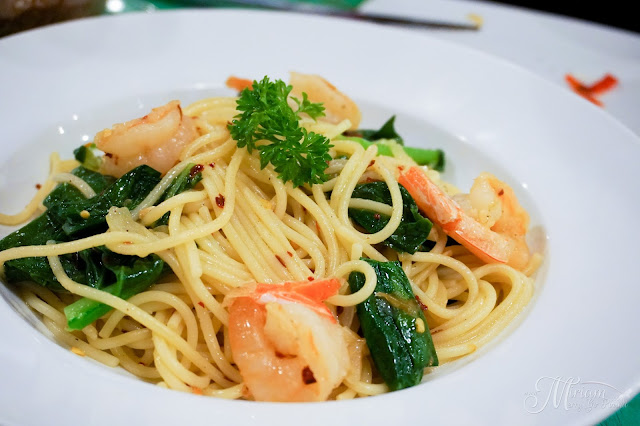 Since we were still feeling a little peckish, we decided to try one of their pasta which is the Aglio Olio Prawn Spaghetti. Now this I like because it had some heat in it and the prawns were nicely cooked, still juicy and sweet. Not too oily, the flavors were on point; making this dish a pleasure to enjoy. 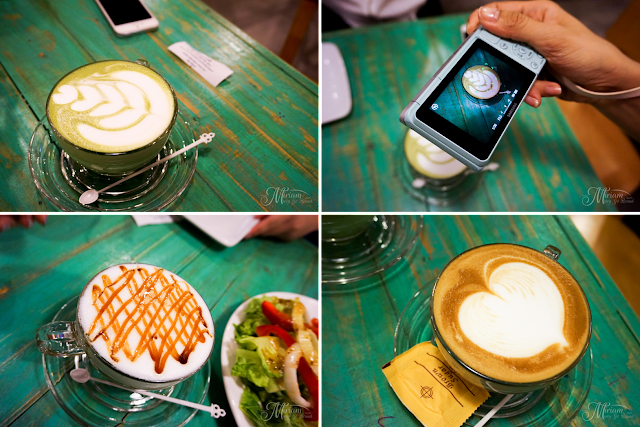 Coffee dates are legit without some drinks so we ordered the Matcha Latte, Caramel Macchiato and Vanilla Latte which were enjoyable.

Overall it was a great hangout session with Bowie, Sin Yee, Rebecca, Adeline and Sharon which unfortunately I had to rush off. Would be great to be able to stay longer and chit chat but we will be having a nice getaway soon so I'm sure more catching up will proceed! I've listed their blogs that at my sidebar so check them out too.