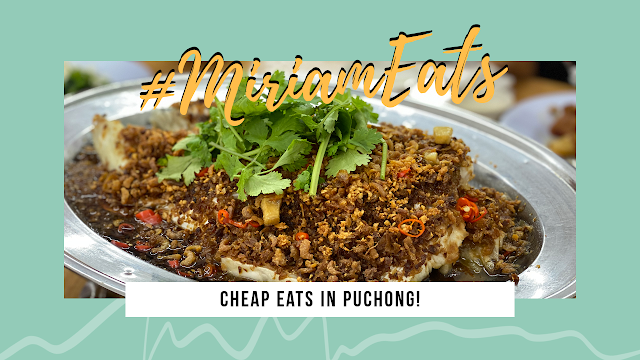 Hi merry goers! I'm back for another #MiriamEats post and this time it is in Puchong. It's been a while since I last went food hunting. Recently since I'm on my fitness journey, I have one day for my cheat meals so last weekend, me and my family visited a newly opened restaurant around our neighbourhood. 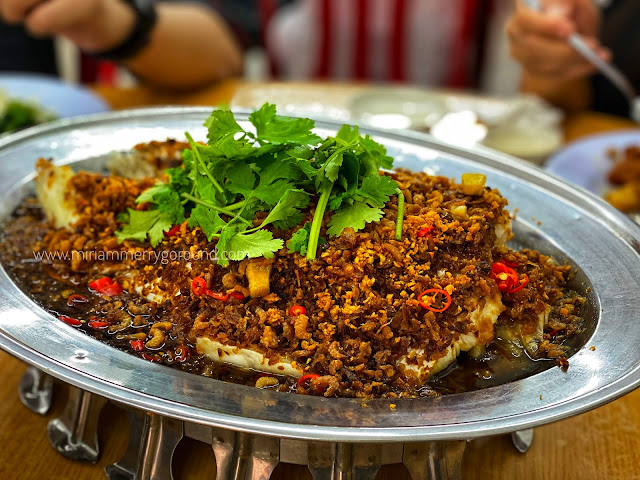 Their signature dish is the Steamed Fish Head which you can order in 4 different cooking methods: Steamed / Preserved Radish / Black Soy Bean / Ginger. Depending on your hunger level for that day, you can opt for the Small or Large serving. However, take my advice and go for the large because it's just an additional RM3 and it's worth it. We were a party of 5 so we decided to order the Steamed Fish Head with Preserved Radish and LARGE. When it arrived, oh boy we were definitely very satisfied with the serving size especially the topping.

We love steamed fish head dishes but that also means we are picky about what is equivalent to a good steamed fish head. Especially for Joel, he is sensitive with the mud-taste that some fish dishes have when it's not fresh plus after our experience dining in a restaurant in Gopeng, Perak our standards for good steamed fish is rather high. That being said, the steamed fish head served in Kim Mun Steamed Fish Head restaurant passed all the tests and is definitely one of the recommended dishes that you must order. Joel even ordered another bowl of rice just to sapu all the toppings! 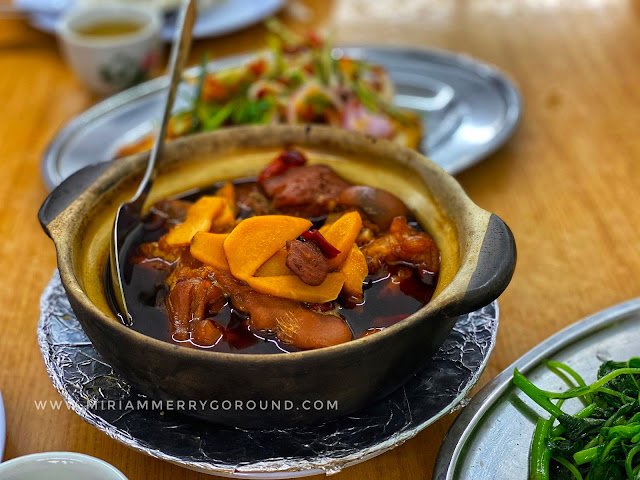 The next dish we ordered was their Vinegar Pork Trotters! This was a dish recommended by the server and the ladies in my family love this dish. It isn't a common dish that you find in most Chinese eateries and it's more of a health dish that ladies eat during their confinement period. The last time I had this dish was when Joel's mum cooked it for us last year and I do have cravings for it. The Vinegar Pork Trotter was served in a claypot and the taste was on point! The vinegar was just well seasoned and the pork trotters tender and juicy. 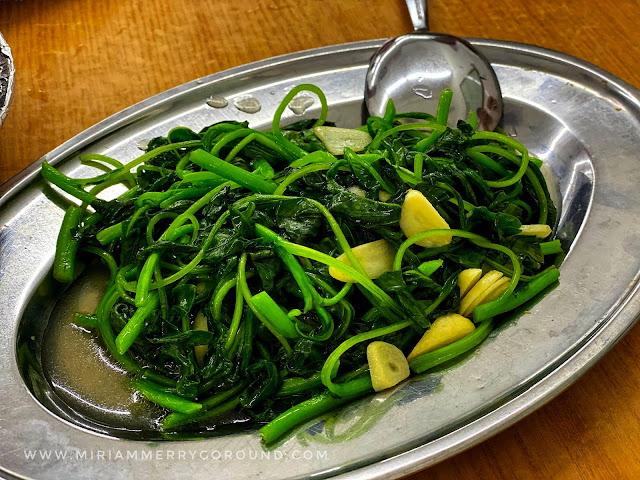 Asides from the Steamed Fish Head and the Vinegar Pork Trotters, we also ordered Chicken in Thai Style and Stir Fried Spinach. Both the dishes were nicely done especially the Stir Fried Spinach. My mum is the typical Asian mum who feels that ordering veggie dishes when we are dining out is not worth it but I'm the daughter who always insists to order at least one veggie dish. There are some restaurants that overcook their vegetable dishes or douse it with tons of oil that you no longer feel healthy eating it but not this restaurant. Good generous serving, cooked just right and not overly oily plus they were generous with their garlic slices too. This dish got two thumbs up from me and my sister. 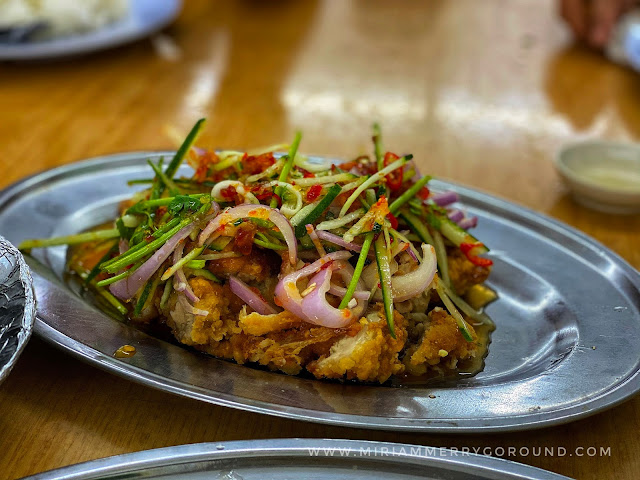 The Chicken in Thai Style did not really stand out as much for me but it was satisfactory. Who can say no to deep fried chicken in sweet Thai chili sauce. The sweet and sour flavors make the whole dinner very appetizing. The chicken is nicely fried, super crispy and had generous toppings on it too. 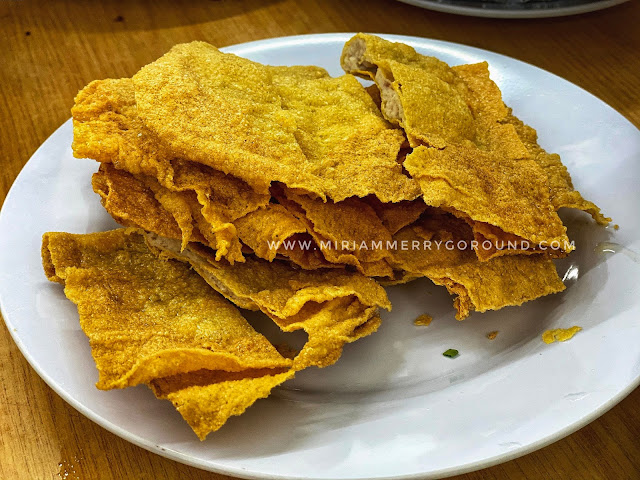 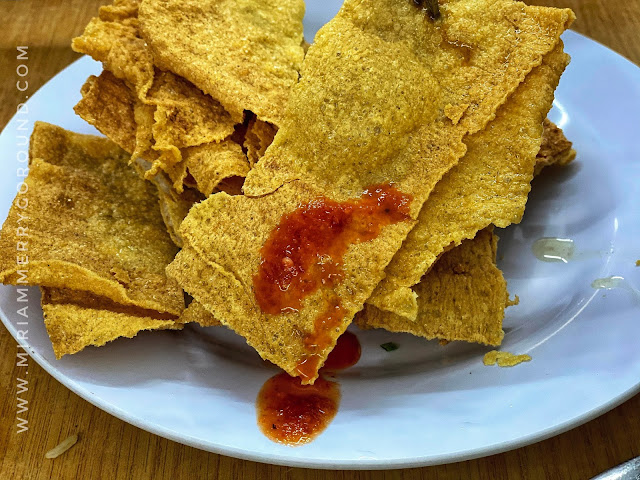 Lastly, while we were just enjoying good conversation and ROI-ing on our pot of tea, we were tempted with the plates of fried beancurd the next table ordered. Kim Mun Steamed Fish Head Restaurant serves Yong Tau Foo dishes as well and initially the server did recommend us to order but we weren't feeling it. But since Joel was eating his final plate of rice and with the excuse that he needed additional dishes to eat with his rice, we decided to order 4 pieces of Fried Stuffed Beancurd and it definitely was worth it. Each piece was huge! And they cut it into three pieces so there was more than enough to share around. Super crispy and well stuffed - this was a good appetizer or for us an ending dish before we call it a night.

In total, the bill came up to RM90 for all 5 dishes with 4 plates of rice and a pot of tea. Tip: You can opt to bring your own tea leaves like we did. They will charge you RM3 for refillable hot water. 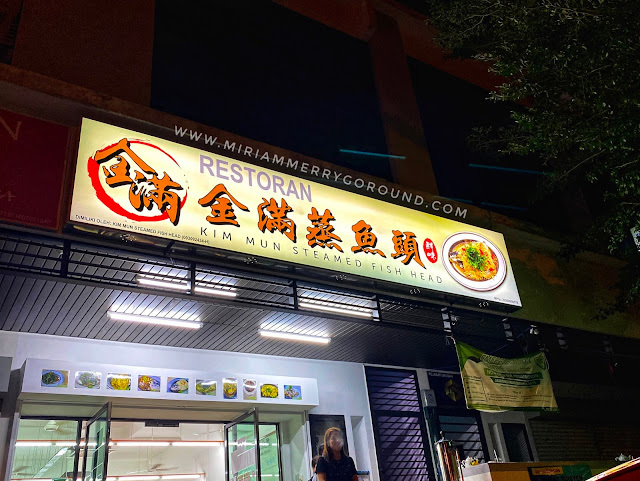