Sorry for the long delay but this is another back-logged post from last month. Totally forgot about it and found it in my folders so here it is.. the review on Daidomon Japanese BBQ Restaurant.

So anyway, since me and my sis are real meat lovers we decided to get this deal and went on a double date with the boyfies after work. Daidomon is located at Great Eastern Mall, Ampang and we parked at the basement parking where there are tons of parking space. My sis made the reservation for 8.30 pm but we reached super early like around 7 plus -.-

Thankfully Daidomon still allowed us to enter since there wasn't much people at that time or else we would have to wander around the mall until 8.30pm. The interior of the outlet was well furnished with each table having respective grill pans. There is also a buffet line even though it is an ala-carte buffet.

Firstly, an ala-carte buffet means you order the food from the menu provided before they serve it to you. So you don't have to get up and fight for your favourite dish. *yays*

Since it was our first time here, the waitress just recommended we order everything for one portion first before we decide! So let's start the meat galore. 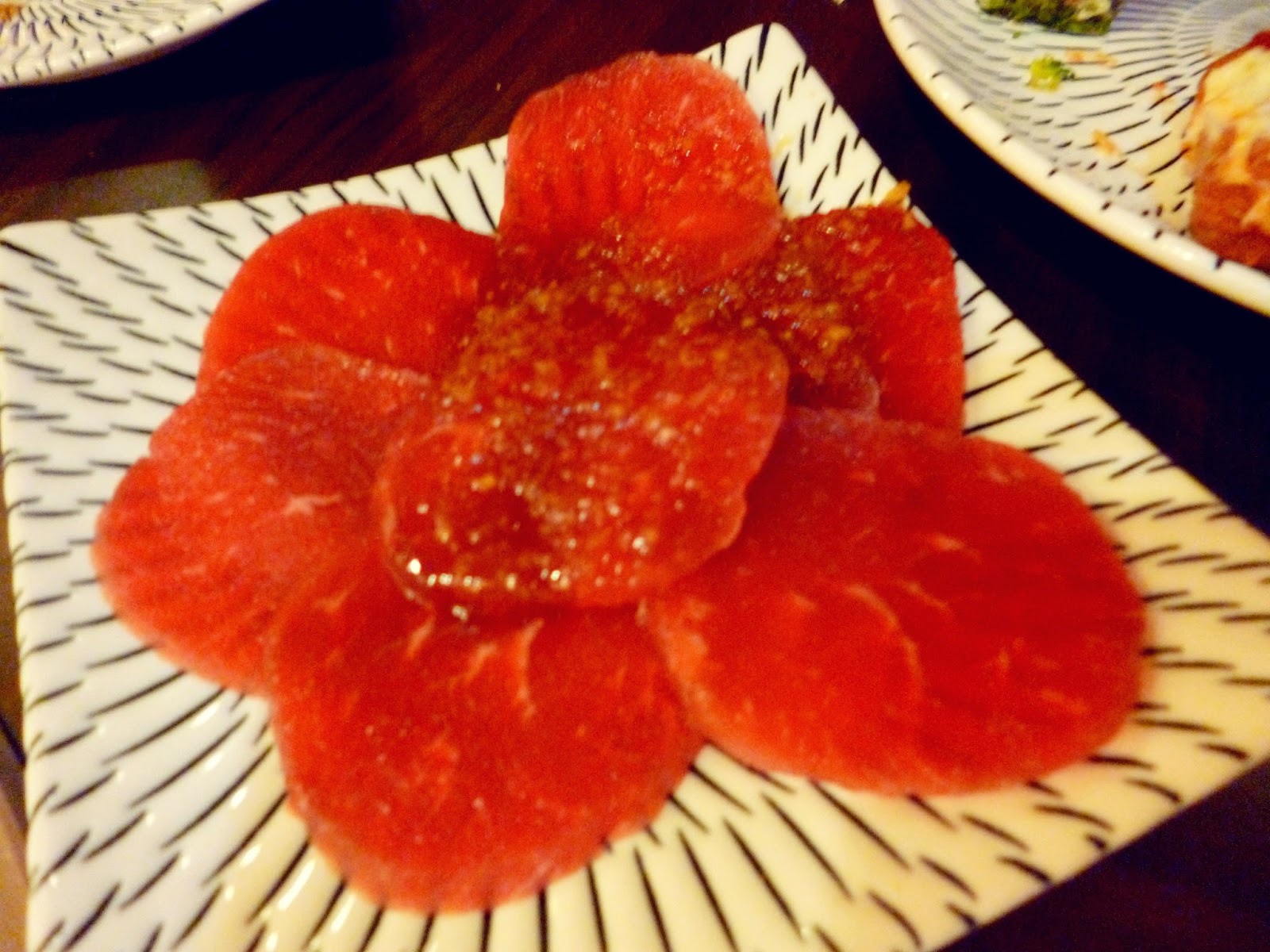 Besides meat, they also have other items like prawns, salmon, tuna, butterfish and others for grilling.

While waiting for our meat to be grilled by the boyfies, we tried their buffet dishes which were quite ok. The potato salad is really delicious!
The sashimi served was quite fresh and thick cut. It doesn't taste fishy at all and from the presentation it really looks tasty. Love their salmon and butterfish. The octopus was not too chewy too! *thumbs up*

At last I was able to try the famous marinated raw beef with egg yolk! My sis and the others gave me their weird looks when I said I wanted to try it but they know I'm super experimental and daring with my foods so I just ordered it! Hah!

Overall, the dish was really smooth and will slides down your throat but I feel that the egg yolk really mask the taste of the beef. The thing that I didn't like is the overpowering taste of the egg yolk and that it was freezing cold that really made my stomach slightly upset.

Guess how I solved the problem of not being able to finish the bowl of raw marinated beef?? Grill it on the grill! It was amazing after grilling like beef scrambled egg! Yums :) 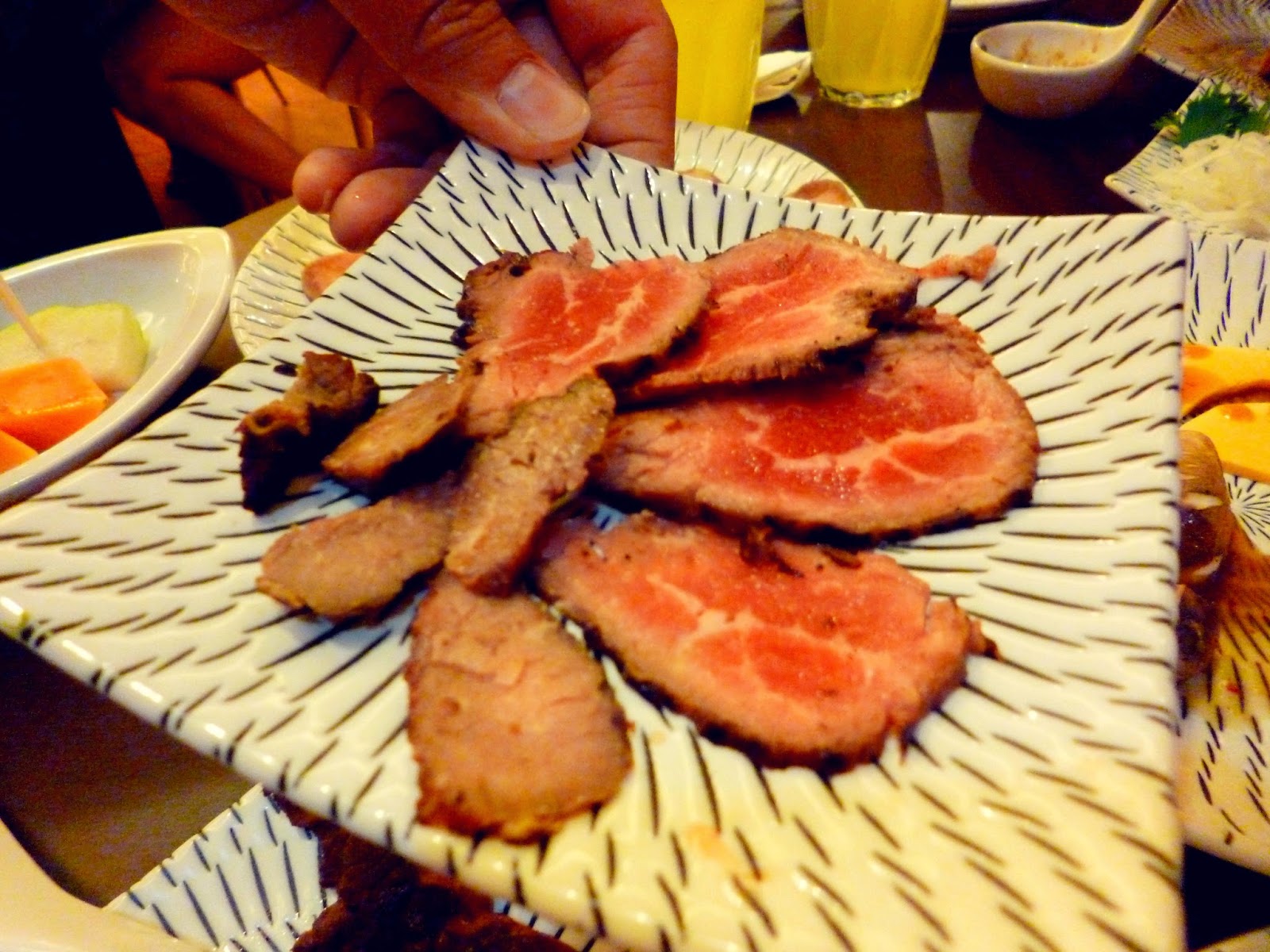 We ordered the ox tongue as well as it was so super buttery and tasty! We thought it was the ostrich meat and sis was eating so many pieces of it until I referred to the menu and realised it was the ox tongue! You should have seen the look on her face! Hilarious!!

Now this is the ostrich meat and you can really taste that gamely taste of the ostrich when you eat this. Slightly tough but still tasty :)


We finished the meal with some ice-creams which I was really disappointed because they were out of green tea and yam! I saw the other table eating and was craving for it. Unfortunately, Daidomon don't refill their ice-creams but scooped them out in bowls placed in the fridge.

Overall it was quite a good experience at Daidomon at the price we paid but if it was the original price I may not return to have a meal there. They do have set meals as well so do check them out!