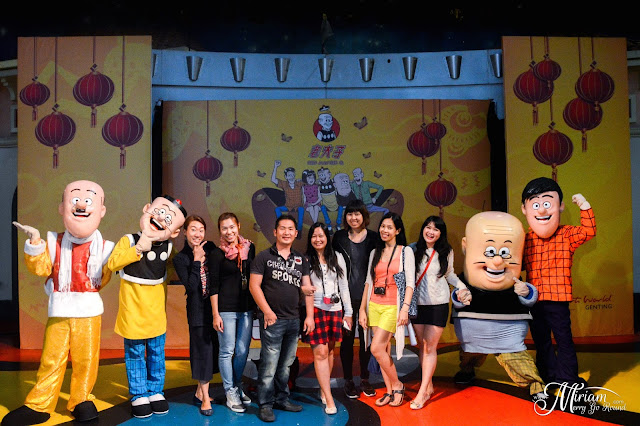 Hello my dear merry goers! It's been a while since my last #MiriamTravels post so today it is going to be about my trip up to Genting with my two dear friends Jessica and Tara! We have been talking about going for a short trip just to have fun, relax and definitely creating more memories together. This opportunity came last weekend where all three of us decided to go up to Genting Highlands for a short cooling retreat! Thank you so much to the dearest Tara for being such a great driver that day as well as her mum for being such a great sport. Our journey up was full of endless chatter, jokes and laughter.

The weather at Genting Highlands was really amazing! I did not manage to check what temperature was it at but there were a lot of fog plus a slight drizzle so you can just imagine the temperature at the top of Genting Highlands. Jessica was super ecstatic about the weather as she super loves the cold while Tara and I were really just hurrying to get indoors. Anyhow, while we were at Genting Highlands we managed to catch the last two days of Old Master Q Exhibition as well as the life show. For those of you who were born before the mid 90s, I think you would be familiar with Old Master Q.

I remember reading this comic when I was still in primary school especially at the hair salon. During those times, we did not have many hip and trendy hair salons and most of us would just go to the neighborhood hair salon for a hair cut which at that time probably just cost around RM10. Gosh! Don't I sound so old when I said "during those times"? Although the comic was in Chinese and I am Chinese illiterate, I could still understand the storyline. For those of you who have not read Old Master Q comics before, I doubt we will be able to actually find a hardcopy of it but you can relate it to Mr. Bean. 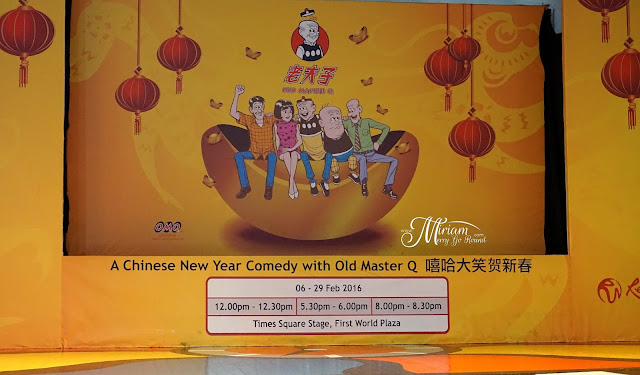 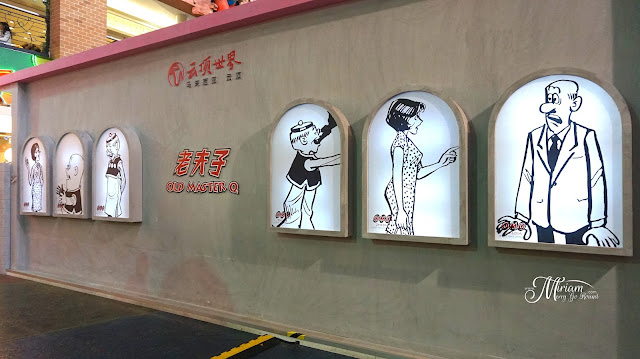 The Old Master Q exhibition and show was held in conjunction for the Chinese New Year celebration at First World Plaza, Genting Highlands from the 6th of February until the 29th of February. There were three different time slots for each show where the characters of the Old Master Q team would perform a short skit at the Times Square Stage, First World Plaza. Unfortunately, this skit is in Cantonese so for those who are not familiar with this Chinese dialect, they might find it difficult to understand. However, the story line is very simple and hilarious so it got the crowd laughing away. 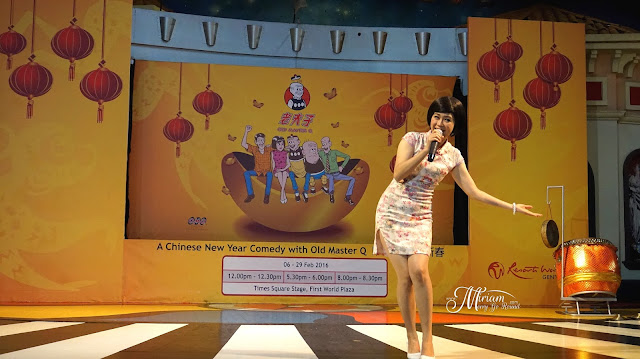 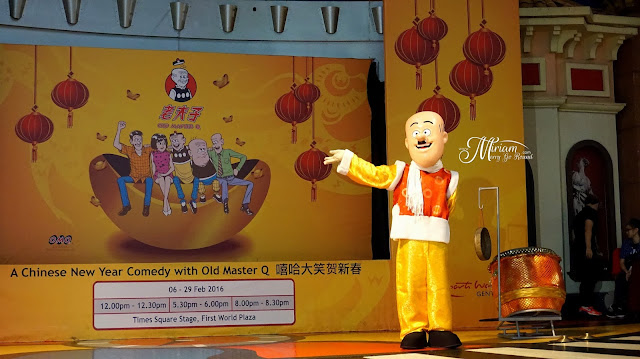 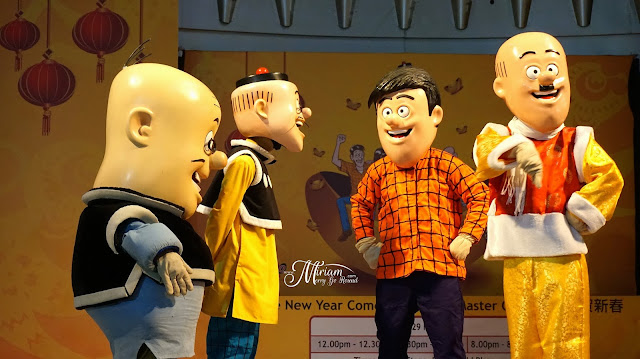 The show started off with Ms. Chan (person-of-interest) of Old Master Q welcoming everyone watching the show and also introducing the rest of the team. You would then see the characters appearing one by one performing the skit. 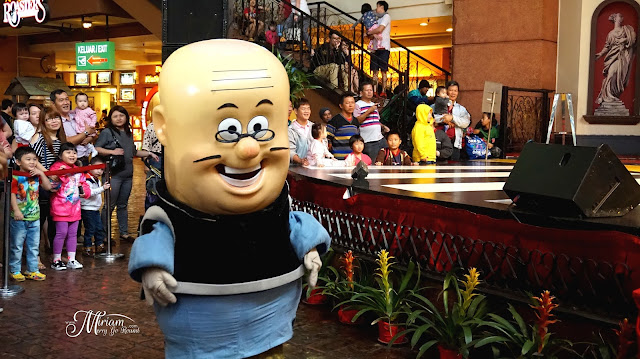 There were some personal contact with the characters too as they came down to centre floor to interact with the public. I must say I am very impressed with the costumes of the character. They were really very well made and looked exactly like the characters in the comic! It was also easy for the characters to go up and down the stage too and trust me when I say it is not easy to move about when you are in a mascot/character costume. 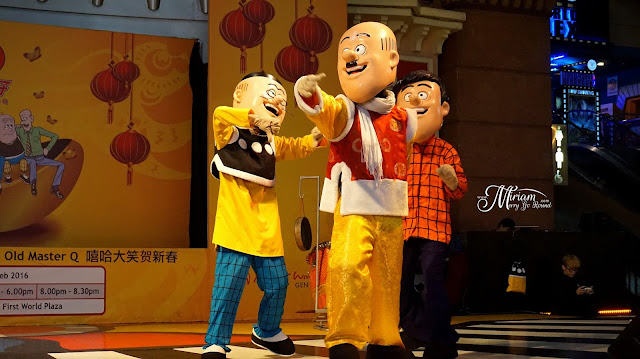 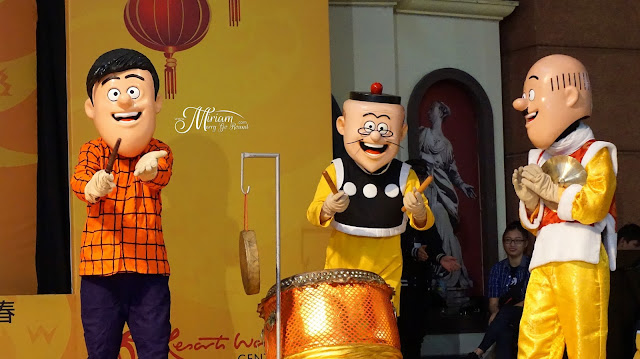 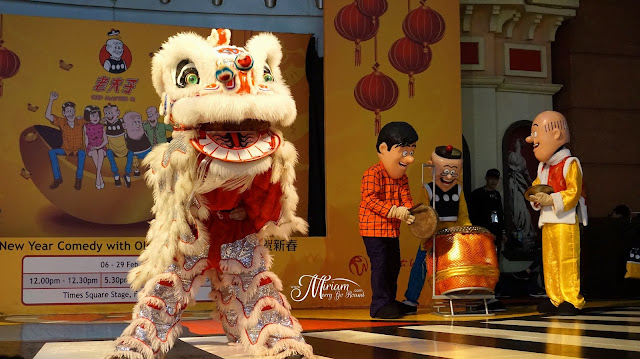 There was a short lion dance as well incorporated in the skit which revolves around Chinese New Year. The lion dance played a significant part in the overall performance. 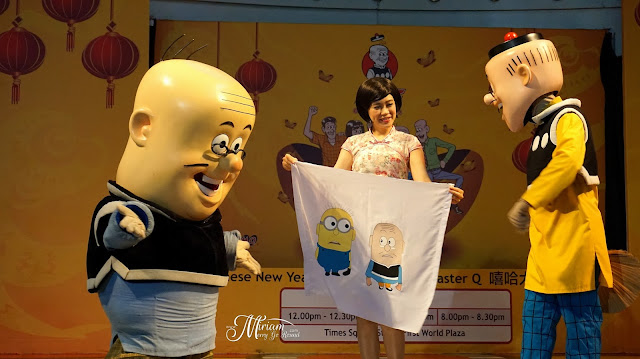 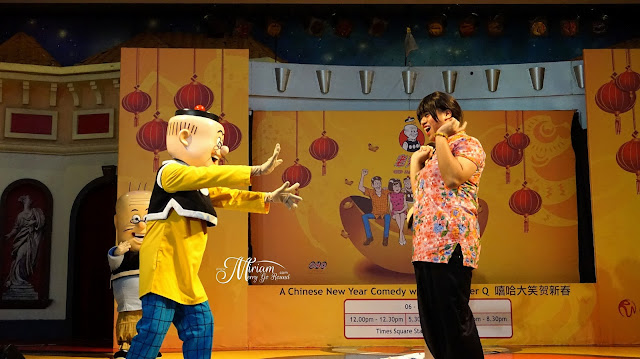 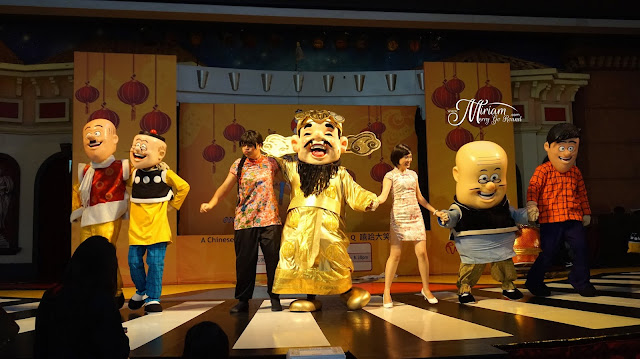 The appearance of Old Master Q's cousin "sister" who was actually a man in a woman's costume as well as the resemblance of Dai Fan Shu with minions were some of the hilarious moments in the performance. The show ended with the characters wishing everyone a prosperous new year ahead. 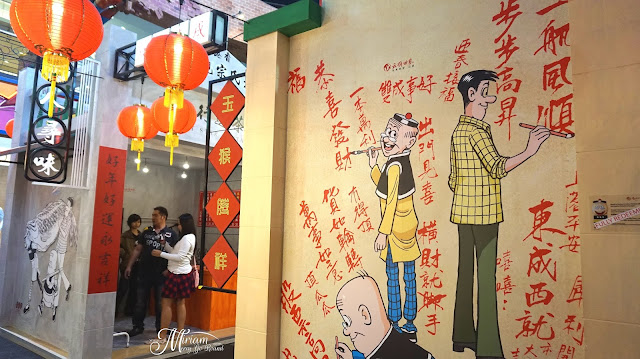 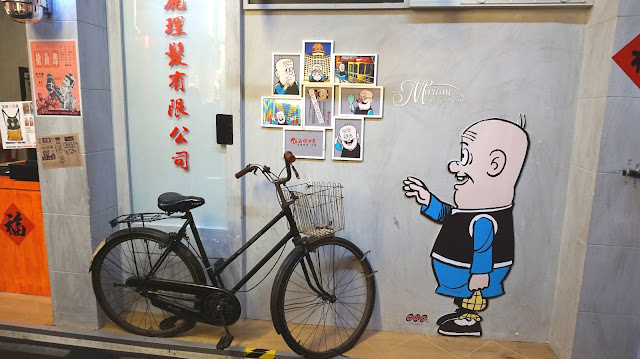 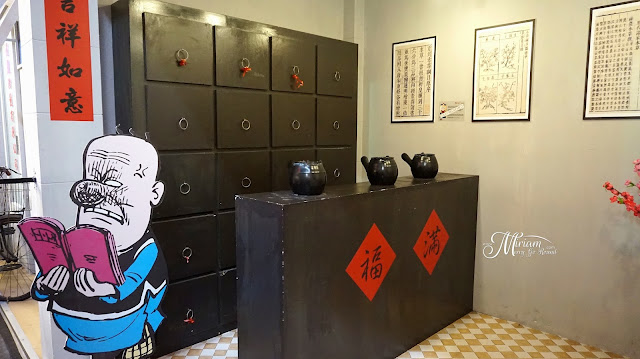 Right in front of the stage was the Old Master Q Exhibition where you will be transported into the world of Old Master Q. The theme was an old shop street in China where you can pose with the decorative items there as well as with the wall art. I am sure everyone is familiar with wall art especially with tons of tourist wall art sites in Penang, Ipoh and some places in Kuala Lumpur. 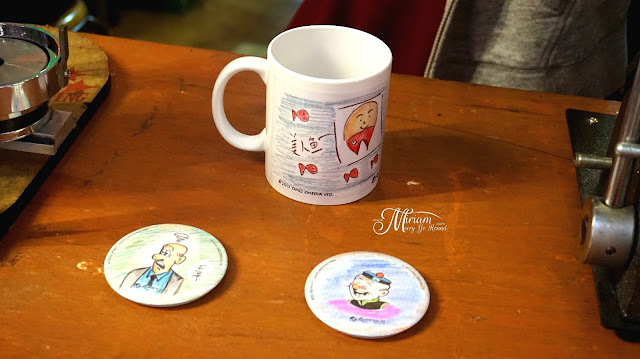 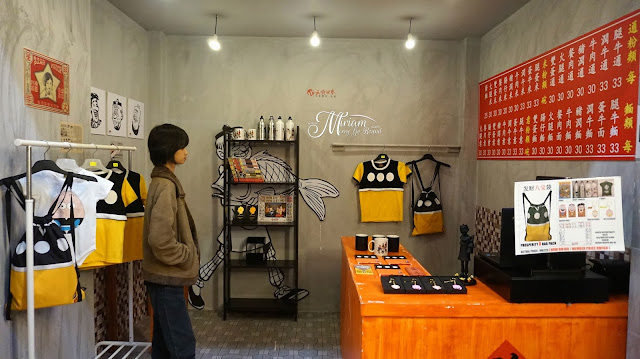 There were also several stalls selling decorative ornaments and souvenirs of the Old Master Q comic for the public who wants to bring a small token back home. 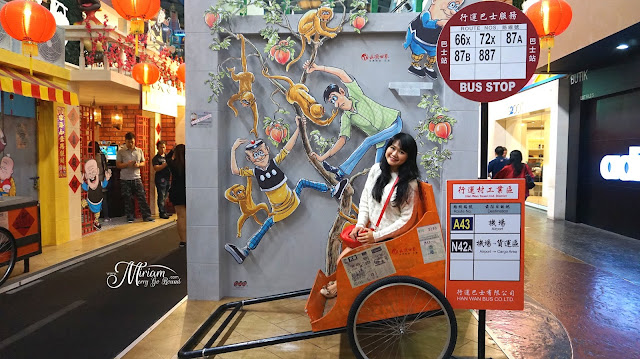 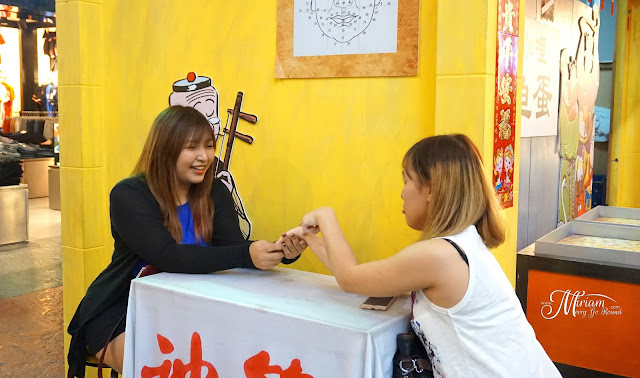 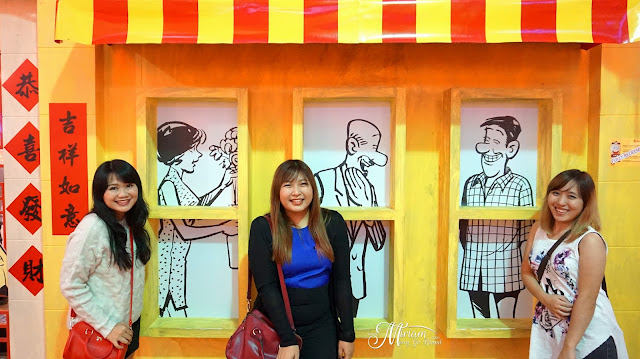 Of course, me and the girls have to take photos for remembrance sake and it was really hilarious how we took the photo. FYI, in case you were wondering that is actually a camera I am holding because I could not find flowers to imitate Ms. Chan in the background. Jess told us to mimic the characters in the background, hence the need to use the camera as a flower. It was definitely a fun trip up Genting Highlands especially since it was with the girls! We definitely need to plan for more short trips which hopefully would be longer trips. I will share with you more of our other activities up at Genting Highlands so that is all for now. 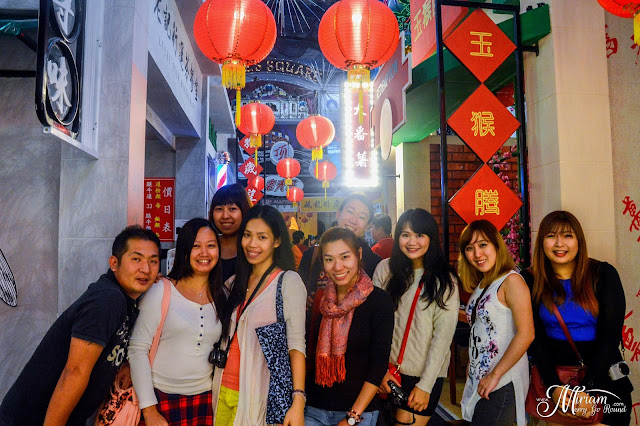